All About the Boil: Regional Seafood Boils Explained 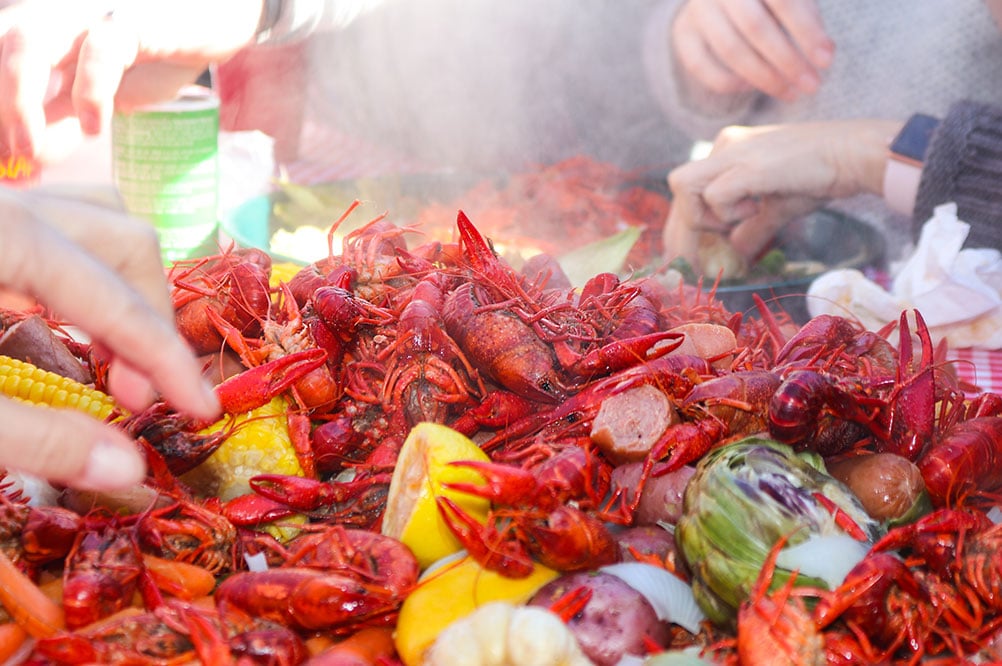 All About the Boil: Regional Seafood Boils Explained

The seafood boil is a time-honored traditional in many coastal regions of the country. Celebrating the warmer seasons and a bountiful catch~in perfect fashion~bringing communities (small and large) together in a social soirée of epic proportions.

Even given our isolation and social distancing practices, different types of seafood boils can still be fun and celebratory!

A boil is a catch-all-term for seafood that’s all cooked up together, often with other non-seafood ingredients. Even though the name comes from the method most popularly used in cooking, boiling in an XL pot, the actual ‘boil’ can vary from steaming, baking or boiling.

Louisiana is a hub for seafood, fresh or saltwater. But, their main claim to boiling fame is the Crawfish Boil. These little crustaceans keep hungry boil-goers busy, busy peeling, shucking and slurping. It is the crawfish that make this style of boil very unique and extremely regional to Louisiana. It is also the heavily spiced brew that sets this boil apart from the others~tis spicy!

The boiled down process goes a little something like this… Crawfish are first soaked and cleaned. While they’re getting their little scrub, their boiling bath is starting to simmer. Loads of cayenne, paprika, hot sauce, salt, lemon and crushed bay leaves are simmered with fresh onion and garlic. This process is started early so these ingredients can cook down and fully flavor the boil. The crawfish are added to the pot, along with additional add-ins like corn and potatoes, and slow simmered to soak in all that goodness. Once fully cooked and soaked the basket is removed and it’s contents dumped on a paper-lined table for easy grabs.

The Louisiana Crawfish Boil is usually served with additional hot sauce and icy cold beers to wash it all down (and cool off the palate).

Georgia and South Caroline specialize in something called Frogmore Stew or Low-Country Boil (fear not, there aren’t actual frogs present in their boils~at least, not on purpose). Frogmore is the name of a community on St. Helena Island, where this style of boil is said to have originated.

Their seafood of choice are shrimp. Shrimp being the seafood of the that region.

Similar in practice to the Louisiana Crawfish Boil, this slightly northern coastal celebration tones down the heat factor a tiny bit. You’ll see more black pepper as opposed to cayenne and malt vinegar replacing hot sauce for zest. The other unique addition to the Low-Country Boil is the use of sausages. Smoky links are cut into chunks and added in, along with potatoes and corn, for further flavor. The Chesapeake Bay Boils are something completely unique from the other southern seafood feasts. For one, their ideal seafood is the blue crab. For another, the cooking method of choice is not boiling, it’s steaming.

Crabs are placed in large steamer pots and generously seasoned with Old Bay. The simmering liquid producing the steam is often beer or beer spiked with vinegar or straight vinegar (it’s all determined by the boiler chef in charge). The crabs steam on, with no additional ingredient add-ins. Once cooked, they’re promptly placed on a paper-lined table for picking and sprinkled with more Old Bay. Often you’ll see side dishes of corn and coleslaw served~side dishes chosen for their ease to be eaten with messy hands. Travel further up the East Coast and you’ll find the epic New England Clam Bake. A boil of sorts, that’s featured seafood is all mollusk.

The most traditional of traditional clam bakes start with a fire pit. These pits are dug into the beach or ground and lined with stones. Once the coals are prepped, the mussels and clams are added and carefully arranged. They are then draped in fresh seaweed, that creates a nice little steamy environment. The rocks and stones that surround the edge of the pit are moved around as well, to give off more heat (indirectly from the coals). Little to no additional seasoning is used, letting the naturally sea-salty flavors shine.

You will see the occasional lobster added in to the clam bake, especially the further north you travel. Win win in our book.

New England does not shirk the side dish duty either, serving corn and potatoes (with a little melted butter) as their classic pairing.

Bring on the Boil!

Wanna create your own seafood boil at home? Perfect! We have all the seafood you need to SHOP NOW.

For the Louisiana Boil, we have the best Gulf Coast Crawfish. Pre-portioned into 5lb. packs, makes it very easy to calculate cooking for a crowd (5lbs = 2 hungry guests).

For the Low-Country Boil, we have some spectacular Fresh Shrimp, caught right in the same Low-Country waters (for true authenticity).

For the New England Boil, we have Clams, Mussels and Lobster! All fresh caught and shipped super fast for the best boil result!