From Lobster Thermidor to Crab Louie

Fine dining around the turn of the 20th century was a thing of opulence, fancy dress and even fancier food. It was a time for creativity in food. The classically trained French chefs developed some of the most innovative and iconic food for the time. Dishes that were instant hits and long standing classics-so much so that even name dropping these recipes today conjure up images of white linen table cloth, crystal goblets and silver flatware.

This dish was created by the great French Master Chef, Auguste Escoffier, who is credited with inventing much of what we consider classical French cuisine today. Around 1880, Chef Escoffier created this dish to honor the launch of a play by the same name, Thermidor.

The King of Salads! This early 1900’s recipe made it’s debut in the fine dining establishments of San Fransisco.  The naming of Crab Louie still remains a mystery…was it named after King Louis of France…? Is it named after a famed San Fran chef named Louis…? Or a restauranteur named Louis Davenport? Who knows? Either way, this legendary salad is still on area fine dining restaurants today. 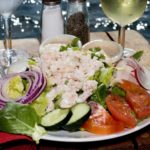 All of the seafood listed in these recipes are available at our online store. As we say, ‘from shore to door, 3 days fresher than the grocery store’-all of our seafood is delivered right to your door when you schedule it, guaranteed! That’s convenience you need, especially for fancy meal prepping and planning.

We’d love to see your Cameron’s Seafood fancy classics-share your images on any of our social pages, Instagram, Facebook or Twitter be sure to tag us @cameronsseafoodonline.