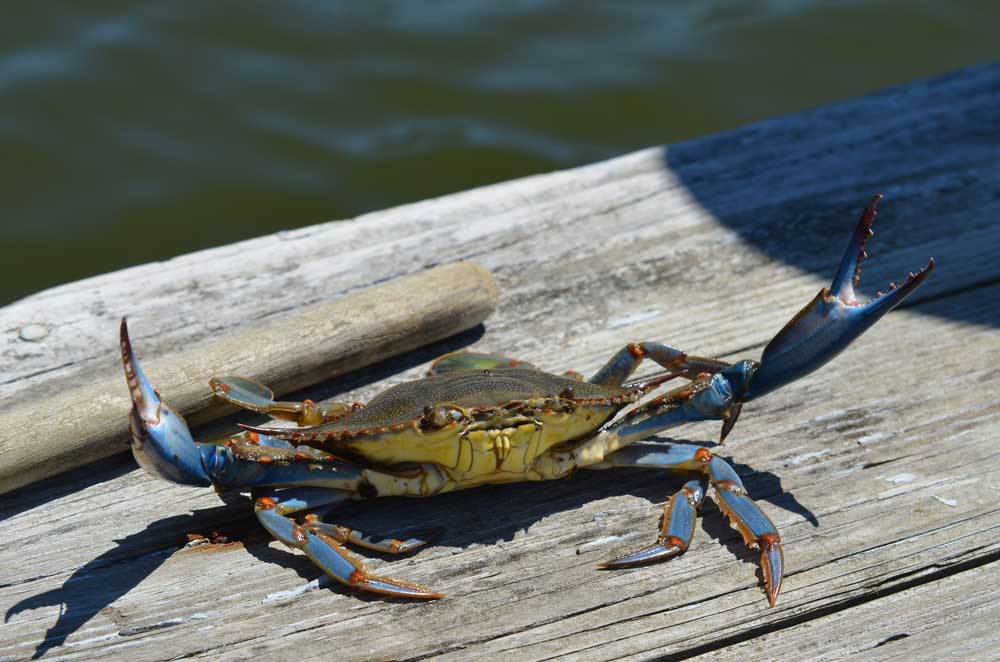 History of the Blue Crab

Maryland has been obsessed with crabs even before, well, Maryland was Maryland. Today, we’ll put on our waders and pull on our wellies as we drudge through the history books to find out why Maryland is so obsessed with the Blue Crab. Before and during the regional colonization (circa 1600’s) Blue Crabs were an important food source for the Native Americans and European settlers. Their consistent abundance and delicate flavor made them a prize for any table or feast. Earliest fishermen often complained of blue crabs, stating how much a nuisance they were, clogging up their nets and eatting bait off their lines-although, not complaining when the family was full and satisfied even though the menu had to be change from fish to crabs. Even as early as the 1200’s, archeological surveys of the region have found crab remnants (in over 93 sites)-all pointing to the importance this crab has on Maryland’s history.

Blue Crab was our nations first. Meaning that other tasty crabby shellfish wasn’t discovered until later explorations west and north. And since early colonial times Chesapeake Bay Blue Crabs filled our nation’s earliest cookbooks with variations going back centuries and being adapted and taught throughout the years.

Take the meat out of the great claws being first boiled, flour and fry them and take the meat out of the body strain half if it for sauce, and the other half to fry, and mix it with grated bread, almond paste, nutmeg, salt, and yolks of eggs, fry in clarified butter, being first dipped in batter, put in a spoonful at a time; then make sauce with wine-vinegar, butter, or juyce of orange, and grated nutmeg, beat up the butter thick, and put some of the meat that was strained into the sauce, warm it and put it in a clean dish, lay the meat on the sauce, slices of orange over all, and run it over with beaten butter, fryed parasley, round the dish brim, and the little legs round the meat.”

Take two Crabs, being boiled, and cold, tale all the Meat out of the Shells and Bodies, mince it small, and put it all together into a Sauce-pan;add to it a Glass of White Wine, two Spoonfuls of Vinegar, a Nutmeg grated, then let it boil up till it is thorough hot; then have ready half Pound fresh Butter, melted with an Anchovy, and the Yolks of two Eggs beat up and mixed with the Butter; then mix Crab and Butter all together, shaking the Sauce-pan constantly round till it is quite hot; then have ready the great Shell, lay it in the Middle of your Dish, pour some into the Shell, and the rest in little Saucers round the Shell, sticking three Corner Toasts between the Saucers, and round the Shell. This is a fine Side-dish at a second Course.”

—The Art of Cookery Made Plain and Easy, Hannah Glasse, facsimile 1747 edition

Lift the shell at both sides and remove the spongy substance found on the back. The pull off the “apron,” which will be found on the under side, and to which is attached a substance like that removed from the back. Now wipe the crabs, and dip them in beaten egg, and then in fine bread or cracker crumbs. Fry in boiling fat from eight to ten minutes, the time depending upon the size of the crabs. Serve with Tartare sauce. Or, the egg and bread crumbs may be omitted. Season with salt and cayenne, and fry as before. When broiled, crabs are cleaned, and seasoned with salt and cayenne; are then dropped into boiling water for one minute, take up, and broiled over a hot fire for eight minutes. They are served with maitre d’hotel butter or Tartare sauce.” As our society grew so did the popularity and reach of the Blue Crab. Baltimore became a cosmopolitan city with a thriving restaurant scene, so much so that other Eastern U.S. cities we’re vying for dishes and recipes from the region.

In the 19th and 20th centuries crab recipes flourished.

Companies, at the time, were seeing the draw that Blue Crabs had on the public, like this recipe from the then Kraft-Phenix Cheese Corporation.

Be part of the obsession and make your own history with Blue Crabs, available at our online store. We offer a variety of Maryland Blue Crab options, like our Premium Large Maryland Crabs, Maryland Soft Shell Crabs and Jumbo Lump Crab Meat.

We’d love to see your friends and family making history with their Cameron’s Seafood Blue Crabs, share you images or stories on any of our social pages, Instagram, Facebook or Twitter be sure to tag us @cameronsseafoodonline.