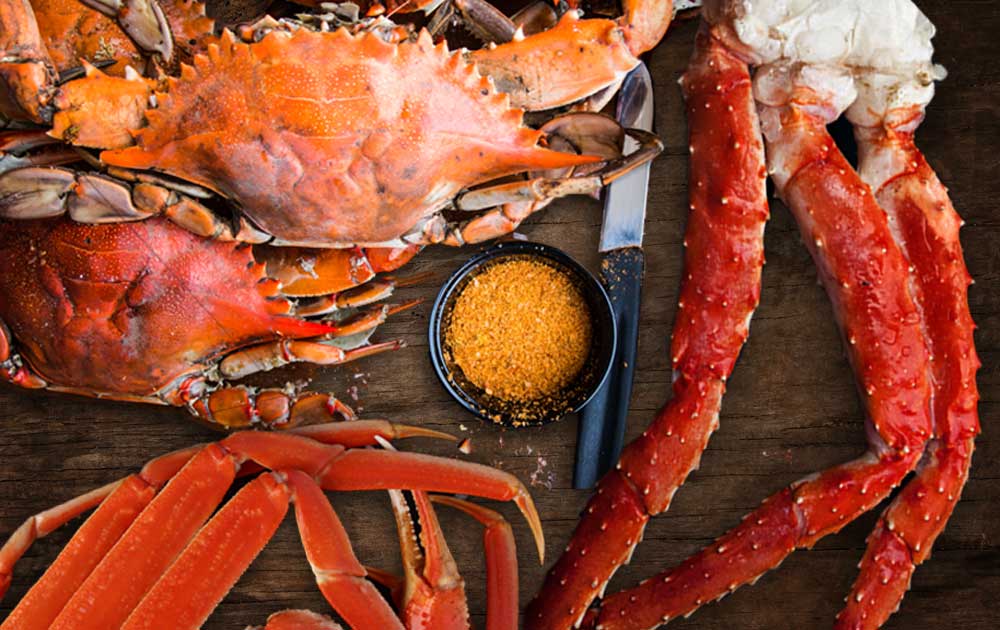 The Difference Between Crabs

There are over 4500 species of crab found all over the world- in oceans, freshwater bays, streams and a couple terrestrial, land loving types. Only a handful of these crab varieties make it to our dining room tables, sought after due to their deliciousness, and the most popular pinchy populations are Chesapeake Bay Blue Crabs, Dungeness Crabs, Snow Crabs and King Crabs. What makes this crabby quartet so popular? Where do they come from? The answers to these questions and more as we dive into the deep blue to understand the difference between crabs…

Blue crabs are found throughout the Mid-Atlantic and the Gulf of Mexico, the most coveted (and highest contributor) are crabs found in the Chesapeake Bay. The smaller of the crabby quartet, these crabs can grow up to 10 inches and their size denotes their value. #1’s or Jumbos are the largest at 6+inches with #2’s falling just shy of that number and #3’s ranging from 4.5-5 inches, the smallest size to be legally caught. Their size is measured by the length of their shell (not a combination of legs and shell). These tiny culinary titans are renowned for their flavor, a combination of sweet salinity with the body meat being the most sought after. Jumbo lump crab meat represents the largest intact body meat pieces while lump crab meat represents a moderate portion of body meat plus some meat from the claws. Dungeness crabs get their name from a quaint fishing village in Washington state, Dungeness, Washington. Found in Pacific waters ranging from Alaska to Santa Barbara, California, Dungeness crabs would be the bulky hunk of the group. Their fan shaped sizable shell is the tell tell, growing as much as 10+ inches across and total weight pushing 2lbs. Their meat is sweet, tender and delicate making it a West Coast delicacy, especially during the peak season from November till the end of June. 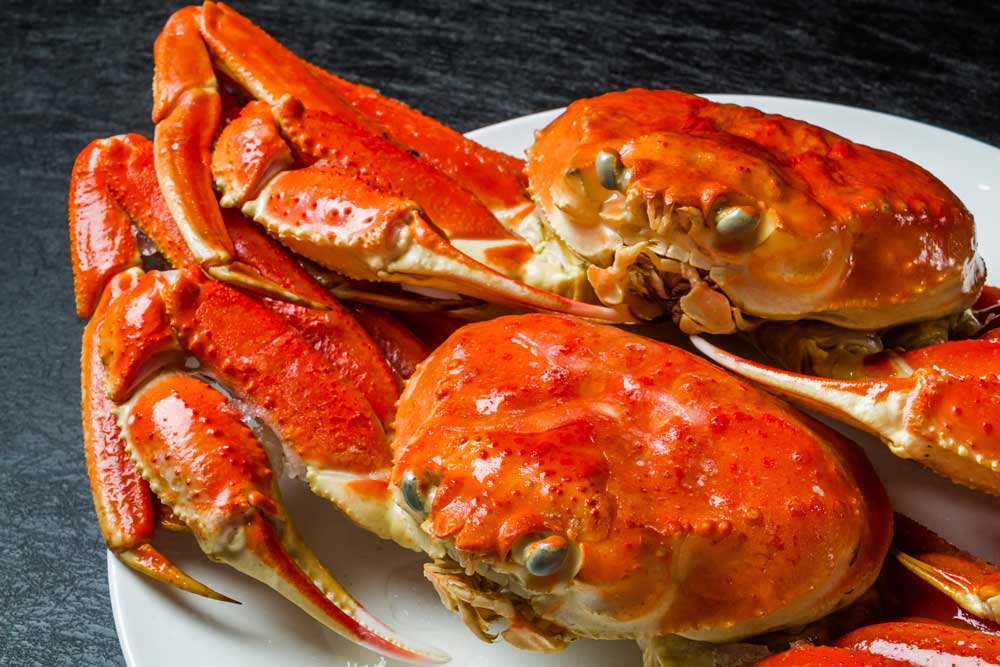 Snow crabs are found in the bitter cold waters from the Pacific North West and North West Atlantic, Alaska to Siberia and Greenland to Newfoundland, often crab season begins when the ice breaks (around mid April running til early November). Snow crabs are mostly legs, with their bodies being short and round and averaging from about 2-4lbs. Males tend to be double the size of the females and are most likely to land on our plates (sorry fellas). You’ll probably only see snow crabs sold in clusters, this being an already spilt and cleaned crab. Snow crab meat is hearty with a hint of salt, perfect for a dip in the melted butter cup. King crabs are the most commercially important shellfish species in Alaska, being not only a way of life for many watermen and crabbers but a valuable revenue stream for the state. King crabs are divided by region and species, being 3 different types of crabs- red, blue and brown, and whether their caught in the Bering Sea or other Atlantic Alaskan waters. They’re called ‘king’ for a good reason, they weigh between 6-8lbs. (some getting as large as 20lbs.), their bodies are, on average, 11 inches with a leg span of almost 5ft.!! King crab meat is mild in flavor with a nice sweetness and their legs are things made of legend.

Taste the difference between Blue Crabs, Dungeness Crabs, Snow Crabs and King Crabs, all available at our online store. As we say, ‘from shore to door, 3 days fresher than the grocery store’-all of our crabs are delivered right to your door when you schedule it, guaranteed!

We’d love to see your friends and family enjoying their Cameron’s Seafood Crabs and Crab Legs-share you images or stories on any of our social pages, Instagram, Facebook or Twitter be sure to tag us @cameronsseafoodonline.